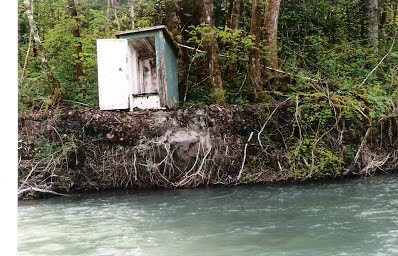 Once there was a young boy that lived in the country. They had to use an outhouse, the little boy hated it because it was hot in the summer and cold in the winter and stunk all the time.   The outhouse was sitting on the bank of the river and the boy determined that one day he would push that outhouse in the water.  One day after a spring rain, the river was swollen so the little boy decided today was the day to push the outhouse in, So he got a large pole and started pushing. Finally, the outhouse toppled in and floated away.  That night his dad told him they were going to the woodshed after supper. Knowing that meant a spanking, the boy asked why.   The dad replied, "Someone pushed the outhouse into the river today. It was you, wasn't it son?"

The boy answered yes. Then he thought a moment and said, "Dad, I read in school that George Washington chopped down a cherry tree and didn't get into trouble because he told the truth."
The dad replied, "Son, George Washington's father wasn't in the cherry tree."