An old Doberman starts chasing rabbits and before long, discovers that he's lost.

Wandering about, he notices a panther heading rapidly in his direction with the intention of having lunch.

Noticing some bones on the ground close by, he immediately settles down to chew on the bones with his back to the approaching cat.

Just as the panther is about to leap, the old Doberman exclaims loudly, "Boy, that was one delicious panther!  I wonder, if there are any more around here?"

Hearing this, the young panther halts his attack in mid-strike, a look of terror comes over him and he slinks away into the trees.

"Whew!," says the panther, "That was close! That old Doberman nearly had me!"

Meanwhile, a squirrel who had been watching the whole scene from a nearby tree, figures he can put this knowledge to good use and trade it for protection from the panther.

The young panther is furious at being made a fool of and says, "Here, squirrel, hop on my back and see what's going to happen to that conniving canine!"

Now, the old Doberman sees the panther coming with the squirrel on his back and thinks, "What am I going to do now?," but instead of running, the dog sits down with his back to his attackers, pretending he hasn't seen them yet, and just when they get close enough to hear, the old Doberman says .......

"Where's that squirrel?  I sent him off an hour ago to bring me another panther!"

Don't mess with the old dogs...

Age and skill will always overcome youth and treachery!

Grap and brilliance only come with age and experience.

A Man died and went to heaven. As he stood in front of St. Peter at the Pearly Gates, he saw a huge wall of clocks behind him. He asked, "What are all those clocks?"

St. Peter answered, "Those are Lie-Clocks. Everyone on Earth has a Lie-Clock. Every time you lie the hands on your clock will move."

"That's Mother Teresa's. The hands have never moved, indicating that she never told a lie."

"Incredible," said the man. "And whose clock is that one?"

" Hillary's clock is in Jesus' office. He's using it as a ceiling fan."

An admiral visited one of the ships of the line under his command.

While eating breakfast with the crew he was impressed to see the Naval Insignia stamped on every biscuit.

He went to the Chief cook to ask how this feat was done, so it could be used on other ships under his command.

The Chief replied, "I’d be glad to share that with you, Admiral. After each biscuit is cut, I just slap it here against my belt buckle which bears the Navy Insignia.

The Chief shrugs and replies, "Well, if that’s the way you feel, sir, I suggest you avoid the donuts." 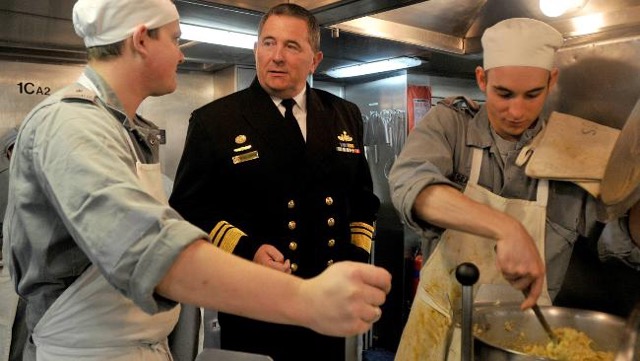 Upon hearing that her elderly grandfather had just passed away, Katie went straight to her grandparent's house to visit her 95 year-old grandmother and comfort her. When she asked how her grandfather had died, her grandmother
replied, "He had a heart attack while we were making love on Sunday morning." Horrified, Katie told her grandmother that 2 people nearly 100 years old having sex would surely be asking for trouble. "Oh no, my dear," replied granny. "Many years ago, realizing our advanced age, we figured out the best time to do it was when the church bells would start to ring. It was just the right rhythm. Nice and slow and even. Nothing too strenuous, simply in on the Ding and out on the Dong." She paused to wipe away a tear, and continued, "He'd still be alive if the ice cream truck hadn't come along."