Leave it to a little kid to put a smile on Your face!! This is truly first grade logic.

Little Susie goes home from school and tells Her mom that the boys keep asking her to do Cartwheels because she's very good at doing Them.

Mom said: "YOU should say NO - they only want To look at your undies.” 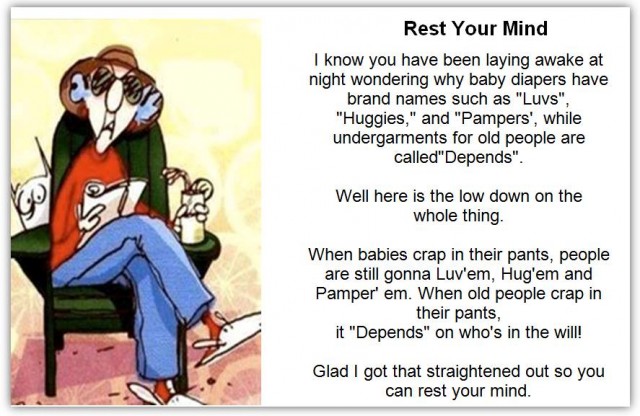 Ed came home drunk one night, slid into bed beside his sleeping wife, and fell into a deep slumber.

He awoke before the Pearly Gates, where St. Peter said, 'You died in your sleep, Ed.'

St. Peter said, 'I'm sorry, but there's only one way you can go back, and that is as a chicken.'

Ed was devastated, but begged St. Peter to send him to a farm near his home. The next thing he knew, he was covered with feathers, clucking and pecking the ground..

A rooster strolled past. 'So, you're the new hen, huh? How's your first day here?'

'Not bad,' replied Ed the hen, 'but I have this strange feeling inside. Like I'm gonna explode!'

'You're ovulating,' explained the rooster. 'Don't tell me you've never laid an egg before?'

'Well, just relax and let it happen,' says the rooster. 'It's no big deal.'

He did, and a few uncomfortable seconds later, out popped an egg! He was overcome with emotion as he experienced motherhood. He soon laid another egg -- his joy was overwhelming..

As he was about to lay his third egg, he felt a smack on the back of his head, and heard.....

Getting OLD just ain't what they said it would be!