I am seeing 5 gentlemen (give or take) every day!.
As soon as I wake up, Will Power helps me get out of bed.

Then I go to see John.

Then Charlie Horse comes along, & when he's here,he takes up a lot of my time & attention.

When he leaves,
Arthur Ritis shows up & stays the rest of the day.
He doesn't like to stay in one place very long so he takes me from joint to joint. 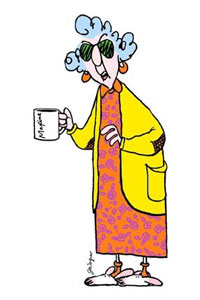 and I'm thinking of calling JACK DANIELS, Jim Beam, Jose Quervoor JOHNNY WALKER to come over and keep me company.

Now remember: Life is like a roll of toilet paper...the closer it gets to the end, the faster it goes.

Some great shots of a the shuttle flyby

A doctor from Israel says: "In Israel the medicine is so advanced that
we cut off a man's testicles; we put them into another man, and...
in 6 weeks he is looking for work."

The German doctor comments: "That's nothing, in Germany we take part
of the brain out of a person; we put it into another person's head,
and...
in 4 weeks he is looking for work."

A Russian doctor says: "That's nothing either. In Russia we take out
half of the heart from a person; we put it into another person's
chest, and...
in 2 weeks he is looking for work."

The U.S. doctor answers immediately: "That's nothing my colleagues,
you are way behind us...
in the USA, about 2 years ago, we grabbed a person from Kenya with no
brains, no heart, and no balls...
we made him President of the United States, and now...
the whole country is looking for work.

Once upon a time there lived a king.
The king had a beautiful daughter, The PRINCESS..

But there was a problem. Everything the princess touched would melt.
No matter what;

Metal,
Wood,
Stone,
Anything she touched would melt.

Because of this, men were afraid of her. Nobody would dare marry her.

The king despaired. What could he do to help his daughter?

He consulted his wizards and magicians. One wizard told the king,
'If your daughter touches one thing that does not melt in her hands,
she will be cured.'

The king was overjoyed and came up with a plan.

The next day, he held a competition. Any man that could bring his daughter
an object that would not melt would marry her and inherit the king's wealth...

The first brought a sword of the finest steel.

But alas, when the princess touched it, it melted.
The prince went away sadly .


He thought diamonds are the hardest substance in the world and would not melt. But alas, once the princess touched them, they melted.

He too was sent away disappointed.

The third prince approached. He told the princess,
'Put your hand in my pocket and feel what is in there.'

The princess did as she was told, though she turned red .

She felt something hard. She held it in her hand.
And it did not melt!!!

And the third prince married the princess and they both lived happily ever after.

Question: What was in the prince's pants ?

They melt in your mouth, not in your hand.
What were you thinking??


I STILL WORRY ABOUT YOU SOMETIMES!!!

A crusty old Marine Sergeant Major found himself at a gala event hosted by a local liberal arts college.

There was no shortage of extremely young idealistic ladies in attendance, one of whom approached the Sergeant Major for conversation.

"Excuse me, Sergeant Major, but you seem to be a very serious man. Is something bothering you?"

The young lady looked at his awards and decorations and said, "It looks like you have seen a lot of action."

The young lady, tiring of trying to start up a conversation, said, "You know, you should lighten up. Relax and enjoy yourself."

The Sergeant Major just stared at her in his serious manner.

Finally the young lady said, "You know, I hope you don't take this the wrong way, but when is the last time you had sex?"

"Well, there you are. No wonder you're so serious. You really need to chill out! I mean, no sex since 1955! She took his hand and led him to a private room where she proceeded to "relax" him several times.

Afterwards, panting for breath, she leaned against his bare chest and said, "Wow, you sure didn't forget much since 1955."

The Sergeant Major said, after glancing at his watch, "I hope not; it's only 2130 now."